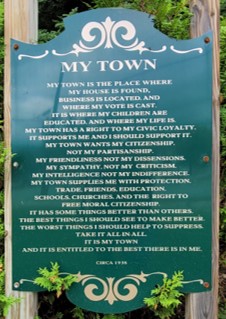 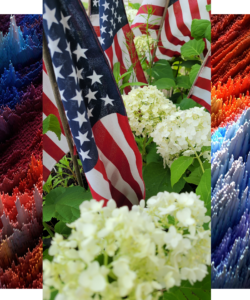 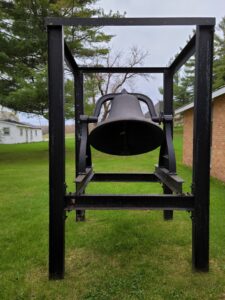 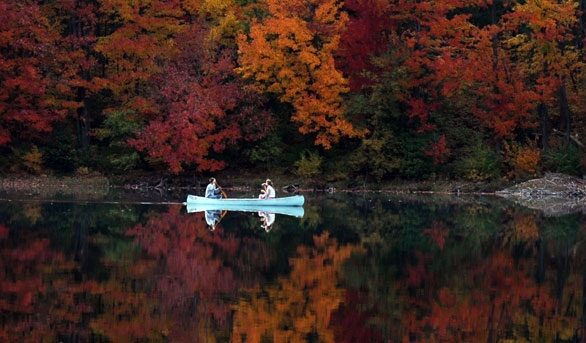 As the glaciers retreated and the lakes receded, the landforms of Wolverine began to take shape. Forests began to cover the hills and the woods filled with wildlife. Elk, bear, and deer roamed the woods as flocks of wild passengers pigeons flew overhead. Through the centuries the Sturgeon River meandered through the valley, catching the runoff of the spring thaws as the water drained toward the Great Lakes.

The first humans to pass through were native Americans who came to hunt and then moved on. they stayed close to the rivers and lakes and seldom came this far into the interior of Northern Michigan. The forests were dense and most settlements took place along the major lakes and rivers. It wasn’t until after the Civil War was over, that settlers began to move into this part of Michigan.

As the fur trade diminished on the Great Lakes, fishermen and businessmen began to settle in villages along the coastline. They settled along the shores of Lake Michigan and Lake Huron and especially at areas where rivers gave them access to the interior land. Lumber became recognized as a resource for building, as well as for firewood. Coopers became employed in building barrels for shipping fish and boat builders wanted the tall white pine that covered the forest. As more sailing ships began to ply the Great Lakes it became easier to ship fish and lumber to Chicago and Detroit.

Between 1840 and 1843, surveyors Mullet and Burt surveyed Cheboygan County and named lakes after themselves. In 1849, Cheboygan Township was organized and this included the County of Cheboygan. In 1855, the area land office moved from Flint to Duncan City, across the river from Cheboygan. In 1858, the Cheboygan State Road was authorized by the Legislature and began to be built. this route was a path used by a horse and rider or dog sleigh to connect Saginaw to Sault Ste Marie.

In 1864, the population of Cheboygan County was 483 and most lived and worked at the Duncan Bay Mill in Cheboygan. In 1867, the Slack Water navigation Company was organized to construct locks in the Cheboygan River and they were finished by 1869. This opened water travel up the river, through Mullet Lake. In 1870 the Cheboygan city census was 800 and by 1871 it was 1500. the changes then came rapidly as many lumber companies became active in the county. The Civil War was over and the rest of the county was ready to get to work. Civil War Vets were given land grants and many looked to the northern forests of Michigan as a place to live and work.

By 1880 the County population had grown to 6,524 of which only 2,800 of those lived in the City of Cheboygan. The rest were spread throughout the county. Supplies for the Wolverine area now came to Cheboygan by boat or Gaylord by train. They were then brought to Wolverine by horse and cart.

In 1881, the Michigan Central Railroad had extended their line to Mackinaw City. The Grand Rapids Railroad completed their line to Mackinac in 1882. the first car ferry, the “Betsy” carried railroad cars across the Straits, pulled by the Algomah. Passageways had been opened through Mullet and Burt Lake and the Inland Navigation Company operated three steamboats through the inland water route. Tourists began to take trains north in the summer as “hay fever, asthma, bronchial and lung affections” drove them out of the the crowded cities. In days before modern plumbing and heating, cities were dirty, smelly, unhealthy places, especially in the summer so families looked forward to moving north. by 1903 there were six daily tourist passenger trains passing through Wolverine. the Wolverine Depot opened in 1906 and provided a convenient stopping place for travelers.

By 1890 the County population had grown to 11,986 and the city of Cheboygan only accounted for 6,235 of this. The lumber industry was at its peak and eight area lumber mills were turning out over 100 million feet of lumber per year. Cheboygan County mills produced 35 million laths from 10 mills and 5 million shingles from 5 mills. By 1894 the county population was 13,900. In 1904 it was 17,256. the Detroit and Mackinac Railroad extended its line to Cheboygan.

WHO WERE SOME OF THOSE EARLY WOLVERINE SETTLERS

In 1874 Jacob Shook and sons came to homestead 160 acres east of Wolverine, following the Civil War. Jacob and his sons, William and Herb Shook came to Gaylord by train searching for timberland. Since the train ended at Gaylord, they came to Wolverine with a cart and ox team. Mr. and Mrs. Emphrim Ford homesteaded 120 acres here in 1877. they arrived in Gaylord by train and then walked the rest of the way on a footpath.

Wolverine was first called “Torrey”, when Gorge Richards came to settle here. He purchased a homestead near Weber Lake and used to walk to Gaylord to pick up his mail and supplies. His diary states “Nov 26, 1880 – Wrote to Postmaster General in Washington to have a Post at the Forks, and to be appointed Postmaster as Sturgeon City”. A reply on Dec 17, 1880 granted his request, drew a plat of the post office and changed the name to Wolverine. Before this post office, George Richards walked from Wolverine to Gaylord once a week and carried the mail both ways. He followed a footpath which led around Silver Lake. he spent the night in Vanderbilt, then walked home the following day. Richards served as a postmaster, land and timber looker, real estate dealer, and was elected Representative to Lansing in 1903. In 1882, he helped organize the Wolverine School District and was a member of the School Board for 15 years and its director for 11 years. His great granddaughter, Sue VandenHoek, teaches at Wolverine Schools today.

At the start of 1881, Wolverine had 19 residents. Joe and Fred Start built the Veneer Mill soon after the railroad was completed in 1881 and the population began to grow. In 1883, Edison Roarbeck and his brother-in-law, Simon Warner Vroman had come to Wolverine. Vroman came by train to Petoskey and set out on foot from there to locate his homestead. This was a land grant given to veterans after the Civil War. Simon homesteaded 80 acres and his brother-in-law 160 acres. Vroman used to carry the mail on foot to a hollow tree, about half way between Wolverine and Petoskey. There it was picked up by a man from Petoskey.

The Jackson, Lansing and Saginaw Railroad Company received a deed for railroad property from the State of Michigan at Trowbridge. there they built a two-story house for railroad laborers. Soon there was a school and post office. The boarding house was expanded and had 14 sleeping rooms with a dance hall on the third floor addition. The first floor had a saloon, dining room, kitchen and lobby. This building burnt down.

George Goddard and sons, Bill and Frank, came to Wolverine to work for the Andy Harris Mill. That mill was moved from Battle Creek to Wolverine on a flat car and then moved by team and wagon the Clare Ford Place east of Wolverine.

Cassen B. Stonehouse came to Wolverine from Yale, Michigan in 1891. He operated the steam chest at the Veneer Mill for 10 years. He was also a deputy sheriff and was later named judge and held that post for 23 years. “Logs were put through the steam chest to condition them for the lathe. Following the steam chest operation, they were washed with a huge hose, which removed loose bark and any trace of sand. From there they weren’t on the the lathe and were sliced to one inch thickness in slabs that later became veneer, used mostly in furniture making.” Basket staves were a by-product of the mill and required large drying sheds.

By 1891, the population of Wolverine was booming, with 1,000 residents. The village became incorporated in 1903. The People’s Bank was established about 1900 and the Wolverine State Bank was established on the northeast corner of Main Street. B. E. Thayer established a weekly newspaper known as the “Wolverine Courier” in the early 1900s. In 1912, the “Wolverine Harness Shop” opened and was owned by George Richards. Dr. Marion Goddard came and was the first woman physician in northern Michigan. She made house calls with a horse and buggy and charged $1, including medicine! The Congregational Church was established in 1883, the lumber coming from the Gorge Donner Mill. The Methodist Church was built in 1893.

In 1898, the Babcock family came to Wolverine getting off the train at Trowbridge. Horatio Babcock worked cutting wood and by 1901 he had his own logging operation. Mrs. Babcock cooked at the Cornwell Lumber Company camp for 22 years. She also helped with the farming and canned up to 1,000 quarts of fruits and vegetables for the family to use.

By 1902, the population of Wolverine was 1,80. Charles Peterson opened a meat market in Wolverine in 1903 and there he processed and sold seven head of cattle daily, plus five or six hogs. He bought many of the cattle from Mark Schott who homesteaded the farm on Scott’s Hill in 1884. this later became known as Rhondo. A depot was built there when the train went through. There was a store, post office, a 3-story hotel, planning mill, shingle house, a sawmill and a stave mill there.

In1905, the population was about 1800. On Saturday nights, when the lumberjacks came to town, the population nearly doubled. In 1908, the road on “East Hill” was built in its present location with teams of horses and wagons. Lumbering and forest fires had wiped out most of the wood and farming began to replace lumbering in the area. Early farms used ox teams to plow, drag, harrow and hay. Later horses and tractors made this work easier. Local crops of note were potatoes, corn, beans and apples.

With the lumber gone, the population began to decline and residents had to look for other work. By 1934, ninety men were employed at the fish raising ponds where mills had formerly stood. The Gerhart’s came in 1938 and started a Christmas tree plantation, replanting trees in areas that had been timbered off. Tourism helped as US 27 was paved and Wolverine was on a direct route from Detroit to Mackinaw City. Many people left Wolverine to work in the cities and to do construction work.

Wolverine sat quietly nestled along the Sturgeon River while Gaylord, Petoskey and Cheboygan developed most of the area’s shopping, industry, offices and tourist shops. Things are quietly changing now as retires move “up north” and purchase much of the property that has been lumbered off. The trees have started to come back and people now look to live on the nearby lakes and in the forest settings. Many residents are employed in the tourism industry – hunting, fishing, camping, snowmobiling and cabin rentals. Others build log furniture and log homes. Many drive daily to Gaylord, Petoskey and Cheboygan to work, an average of twenty or more miles. The school is the major employer in town as it cares for the 300 children of area residents.

Today, as Wolverine continues to celebrate its annual summer Lumberjack Festival, it is important that we remember our heritage that is tied deeply to the forests. It is what brought our ancestors to the area. They worked hard to build their homes here and to make a living. Many of their descendants still live in the area. Although the forests were timbered or burned off, they are making a strong comeback. The nearby lakes and Sturgeon River offer beautiful lots for homes and recreation. Our students are keenly aware of the local environment and want to keep it clean and beautiful. We want to preserve the local lore and history of the past and collect our own history to share with future generations.

We hope you enjoy what this beautiful country has to offer and take advantage of the hospitality of the residents of Wolverine. Let them know how much you enjoy the opportunity to share in the richness of the area and history that is Wolverine, MI. 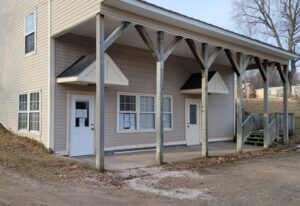 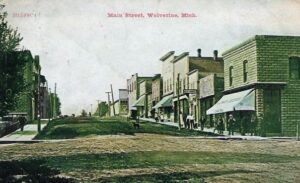 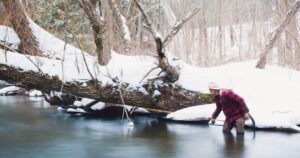 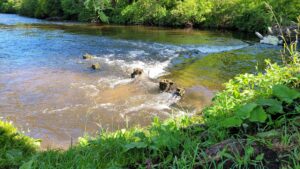